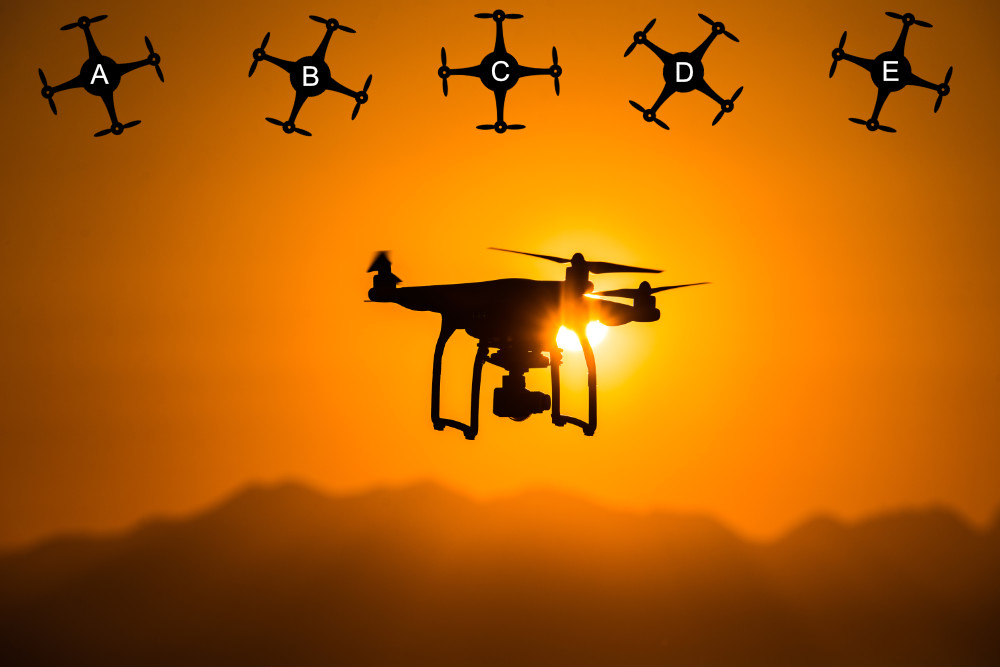 If you’re reading this, you’re probably ready to take your relationship with drones to the next level, congrats! You are now done with that low-end and low-quality drone and want to move up on the scale. Just keep in mind there’s no reason to rush into something too expensive just yet (unless you’re building a production crew or something of the sort).

Today we’ll be sharing a few great basic drone options you have ALL under $537 dollars.

Drones can be a pricey piece of equipment, no doubt! Although a beginner-basic drone can start at less than 50 bucks, they can quickly start to climb up to upwards of above $1,000 dollars! Ouch! Especially if you’re looking for something a bit more advanced and higher-end, you know, one that has 4K, 60 fps, much longer battery life, can fly longer distances, etc etc.

So, if you’re an individual looking to buy an affordable – at the same time powerful drone – then we invite you to continue reading. We scoured Amazon and the web to try and put together a quick and practical list. This is by no means a complete list, of course, you can find more here, but we think these are great to get you started on your next level of drone master!

This is a list of the most powerful drones out there under the price of $500. We’re going to go from most expensive to least and you can take a look at what suits your needs, and most importantly, your budget. Let’s get to it.

Oh, and please note that the prices mentioned are only applicable for the time of writing. Mastering Drones is not responsible for any increase or decrease in prices on behalf of Amazon or the manufacturer in question.

Well, what can we even say about the Spark? It has so many cool features that it makes you think you’re missing another zero in its price tag! Really! The drone is loaded with safety protocols, easy to use features for beginners, a bunch of accessories and more. Let’s talk about the Spark in detail.

The first thing worth mentioning would be the Quick Launch feature. DJI actually put face recognition in the Spark. Yup, this is definitely the sort of thing that makes you go, “Whaaat?” Hold the drone up to eye level and as soon as it recognizes your face with FaceAware, the drone takes off. You’re probably wondering, “Won’t that chop a couple of fingers off or maybe even a nose?” Yes, that is very much possible, however, DJI includes propeller guards to ensure that you don’t get accidentally amputated while using your drone.

Spark includes something called TapFly. Basically, the moment you touch something on your phone’s screen, say a tree 50 yards away, Spark will instantly fly on over to it. Along with that, it also has ActiveTrack. ActiveTrack is dedicated to ensuring that the drone can stay on top of any moving body that you need to record. It doesn’t matter if it’s a car or a walking pedestrian, Spark recognizes the shape and keeps tailing them till you say otherwise.

Let’s talk about hardware now. The camera is hoisted on a 2-axis mechanical gimbal that features DJI’s UltraSmooth technology. What UltraSmooth does is that it keeps the camera steady and greatly decreases stutter, screen shake and keeps the images detailed. Talking about the camera, it’s a 12 MP camera with a 1/2.3 inch CMOS sensor that allows an amazing 1080p video. Spark is well-reputed for its crystal quality imagery and precise colors.

Now, this is a drone that looks like it literally leaped out of a James Bond movie. It’s pure-black and looks nothing like your average drone, which is a good thing. Let’s dive into the specifics.

The very best feature of the BEYOND SKY would be incredible camera mounted on it. It’s a 4K HD camera that can shoot panoramas too. The drone can also perform a ton of cool tricks like the spiraling down with the camera pointing downward, flying while targeted on a subject, circling around a target and spiraling around the subject. If any of these flying patterns don’t work for you, you can also program your own. Tell Mark to follow a certain path and it will remember the drawn path and follow it.

Mark also comes with Gesture recognition. You can put your hand next to your ear for an image. In case you want the drone to start recording a video, just put your hands over your head and it’ll do so.

Mark might look big and bulky, but it can be packed pretty snugly as well. The propellers can be folded in and stored in a regular handbag. The Mark folks in a really unique way. There’s won’t be any damage to the propellers or the drone in general even if there’s a ton of other stuff in that same handbag.

The Zino is one of Hubsan’s finest quadcopters and it’s certainly worth paying this much money for. The copter comes with a 4K Ultra High Def camera that makes this drone a great addition to any photographer’s equipment case.

Hubsan also went above and beyond to ensure that the shots from Zino are as stable as they are clear. The aerodynamics of the drone is aimed to reduce air resistance and achieve the greatest level of mid-flight stability possible. If that isn’t enough, there’s also a three-axis gimbal for the camera to make shooting even more stable. The initiatives taken by Hubsan drones to make shots blur-free complement the camera and make it the absolute wonder it is.

The Zino comes with a bunch of cool fail safes. For instance, if the battery is running low, the drone will first determine whether it has enough juice to fly back. If so, it will fly back home. If the doesn’t have the required battery remaining, it sets down right there. You can easily go and grab the drone from it’s last known location. Thus, ensuring that no matter what the issue is, you never lose your drone.

Contixo is well known for its electronics, but our favorite from their list would definitely be their drones. And, if we’re talking about one drone, in particular, it would be the F24. This copter is perfect for beginners as it has more autonomous modes than any other drone on this list. This includes a fly-to-home feature once the battery is low or GPS is lost. The F24 is programmed to follow you or even circle around a target when instructed to do so. There is a headless mode, auto hover, 1-key takeoff and landing and so much more in this drone.

The tech in the F24 is also pretty amazing. The battery allows a 30 minute flight time on a full charge which is more than any other drone on our list. The camera can record footage in 1080p with amazing clarity, and at the same time, the 5G Wi-Fi can transmit it in raw quality in real-time. Contixo products also come with compatibility with their application that allows a ton of cool features once your drone is hooked up to your phone. It also includes gesture recognition, so you can count on the drone to capture some pretty amazing selfies and portraits.

Potensic T25 is definitely one of the drones you wouldn’t expect on the list. But, it’s still there. The drone doesn’t look like anything special, but it actually has some really cool features. The first of which is a VR-Ready transmission. The copter is mounted with a VR camera, you can experience everything your drone sees in VR with the help of some glasses.

There’s also some neat stuff for beginners too. First, it’s the aluminum case to protect all those valuable components from your clumsy, novice hands. There’s also a feature called Altitude Hold which is a really nice addition for folks that don’t have drone flying down as a skill. It keeps the height locked and allows the user to fly rocking the drone up and down. Along with that, it has a 1080p HD camera with real-time transmission through Wi-Fi and an excellent follow me function. All in all, a pretty amazing drone for the price.

All Posts »
PrevPreviousPurchasing a Refurbished Drone: Good Idea or a Waste of Money?